His photographs document impossible meetings of the ancient past and the contemporary noisy present, between people from different walks of life and contradicting philosophies, between a city and its residents, between material and spiritual.

Captured through precise compositions, which are hard to believe actually happened in reality, Ezra Landau presents us with the beauty, the pain, and the absurdity of Israel 2014. From the narrow streets of the Meah Sha'arim ultra-orthodox neighborhood to IDF positions in the Gaza perimeter, the eye of the camera of Ezra Landau captures small moments that say so much about us, as individuals and as a nation.

The niches to which Ezra Landau has access to, as an ultra-orthodox photographer, allow us a peep into a world that is not revealed to others: Chassidic courts, Talmudai Torah schools, play grounds, back yards and by-ways. His sensitive eye perceives non-verbal messages of struggles, challenges, walls and bridges.

Through his photographs we can perceive eternal questions about the place of the individual within the community, about relationships and communication, about the place of tradition within a contemporary fast changing world full of contradicting messages, and the human search for the hidden, for that which is "beyond" what the eye can see. In each of his photographs Ezra Landau challenges us to open our eyes, and in so doing, to open our hearts. 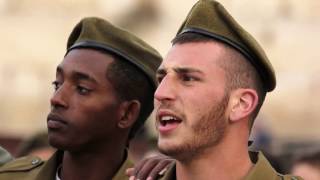